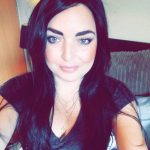 I was a very sick child and was in and out of hospital all the time. It started when I was about one year old and my mum noticed I was acting strangely. I would stare into space for ages and topple over more than was normal. As I got older the staring carried on and I was also ignoring everyone when they spoke to me as if couldn’t hear them. My hands would go into spasm and I would drag my leg when I was walking. Once I started school the teachers complained that I was daydreaming and that I was behind in class. I was tested for deafness but the tests said my hearing was fine. Then I started having seizures and no one could put their finger on what was wrong, until one night, when I was about six, I had a very high temperature and sweating and I had a grand mal seizure. I was taken straight to hospital where they tested me for everything and concluded I must have adult epilepsy but luckily for me a visiting professor came along. He walked in and tapped my face and said ’she has hypoparathyroidism!’.

From that day on I was treated and given medication and all the pieces came together for my parents, they now knew that I might have had hypoparathyroidism from birth which would explain the staring and toppling over. The doctors said it would have been ’mini-seizures’ and that my brain would just shut down for a couple of minutes. Because of that I missed almost everything I was taught in school, so I had a lot of catching up to do.

For a few years I was taking about 11 Sandocal tablets a day plus AT-10 and I was getting bloods tested weekly at the hospital. The doctor became concerned after a while because of the amount of sandocal I was on so he scanned my brain and my kidneys and found out there was calcium deposits in both so I was started on Alphacalcidol and only took Sandocal if I needed it which was great for me as I had nightmares about the stuff. My mum and dad tried everything to get me to take it – bribery, mixing it with juice, and telling me how important it was, but I hated the stuff and still do.

I feel like I’m in control of my hypoparathyroidism now. We need to live our lives with hypoparathyroidism and try and just be proud of ourselves. We are lucky we have doctors helping us and that we have medicine to treat it and maybe one day we will find a cure!

My calcium stayed under control for a while, but then there was the damage it had done to my teeth to repair! I had to have 11 teeth taken out in hospital and spent many years in the dentist’s chair getting drilled and having crowns put on and even with all that my teeth were horrible. I was bullied in school, you can imagine how cruel they were. I’m still having lots of work done on my teeth but I am still traumatised from all the experiences I’ve had with dentists.

Later I found out I had hypoparathyroidism as part of autoimmune polyglandular syndrome. During my teens I found out that my ovaries had failed and that I couldn’t have my own children, when it had always been my dream to have a big family. When I was 18 I just spiralled out of control. My way of dealing with the pain was to party night and day and I would hardly ever take my medication. I was hardly sleeping too. Sometimes my calcium crashed and I would collapse or have a seizure and end up in hospital on drips. This carried on for about a year or so and I was in and out of hospital every couple of weeks until I realised how dangerous it was, and stopped. Now I take better care of myself, I eat right and party once a month if I’m lucky. I’m not willing to give in to hypoparathyroidism and stop having fun and being a normal young woman, but there is a line that I wouldn’t cross now, for example I wouldn’t not take my medication as I now understand how important it is, and I’ve learned to eat and cook very healthy meals which I think helps me control my calcium levels.

I’m now 26 and feel like I’m in control of my hypoparathyroidism now. Sometimes I know things the doctors themselves don’t know. I find it a very interesting condition, and I tell anyone who will listen about it and try and raise awareness and help people understand as much as I can as all of us with hypoparathyroidism are learning new things about our condition daily.

As of right now I couldn’t be happier with my life, I’m in control and loving it! I’m now married and we are trying for a child with IVF. And I’m writing a cookbook to raise money for HPTH UK!

On World Hypoparathyroidism Awareness Day Natalie’s message is: ‘We need to live our lives with hypoparathyroidism and try and just be proud of ourselves. We are lucky we have doctors helping us and that we have medicine to treat it and maybe one day we will find a cure!’