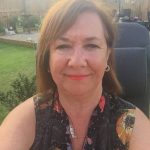 Mary was diagnosed with primary hyperparathyroidism after her doctor noticed her blood calcium was slightly high, although tests failed to localise an enlarged parathyroid gland. She is now on a trial with cinacalcet to control the symptoms

“Surgery isn’t the number one option, so I am on a trial of cinacalcet”

Mary was 64 when she was diagnosed. She writes:

In 2011, I had a blood test for vague symptoms, when my doctor noticed my calcium was slightly high and suggested I had it repeated. I was on the internet straight away looking for causes for high calcium, when I came across a site for hyperparathyroidism…. I couldn’t believe it when I read the list of symptoms … bones, stones, moans, and groans! Apart from kidney stones, I had the lot!

My doc scoffed, he said I would be really ill if I had hyperparathyroidism and my calcium wasn’t that high anyway. I insisted I would like a second opinion and he sent me to see an Endocrinologist where I had more blood tests and a fine needle biopsy on my thyroid gland as they discovered I had nodules on the thyroid gland. The verdict was … no adenoma!

Some days the tiredness has been so overwhelming, that I have fallen asleep whilst eating.

In 2012 I had “stroke like” symptoms which affected the left side of my body and it has taken me until now to get some feeling of normality. I don’t know if this has anything to do with the calcium, but I have seen various specialists from neurologists to rheumatologists to endocrinologists to heart specialists. I have had every test going and no cause found, but my body was telling me I was ill and I wasn’t going to go away and live like this.

Some days the tiredness has been so overwhelming, that I have fallen asleep whilst eating. I have had palpitations so bad, I thought I was going to pass out…. stomach upsets, depression, ringing in ears, bone pain 24/7, that kept me from sleeping, no way was I imagining this! It’s been a long five years. I’ve spent my own money and also seen endos and spoken to surgeons from Harley Street, travelled to Hammersmith and finally at the Royal Victoria Infirmary, Newcastle.

Interestingly, some have agreed I have primary hyperparathyroidism, others insist I haven’t. Luckily the endocrinologist I am seeing at the RVI agrees that I have, but because the adenoma isn’t showing on scans and I have other health problems, surgery isn’t the number one option, so I am on a trial of cinacalcet. I am on to my 15th day, and I know it’s only early days, but my left side bone pain has been considerably less the last couple of days, so fingers crossed!!!!