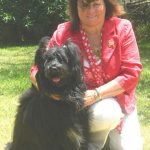 Jan Cobley had surgery for hyperparathyroidism and now has hypoparathyroidism. But she doesn’t let it get her down, especially with her dog Cleo at her side!

In 1999 Jan Cobley and her husband Jim had decided to invest in a rental property in Portugal when their plans had to go on hold while Jan was admitted to hospital with very high calcium. After endless battles for treatment, Jan had surgery on her parathyroids for what turned out to be hyperplasia so all her parathyroids were removed. She was in hospital for two weeks while her calcium was stabilised, and was sent home with just one calcium tablet a day.

Meanwhile they had decided to go ahead and bought their restored farmhouse in Portugal in 2000 and had started to visit it with their dogs a few times a year. Jan was still feeling very unwell and her endocrinologist told her that he suspected MS and proposed sending her to a neurologist when she returned to the UK following her next visit to Portugal.

It was while she was there that Jan’s husband sought out a German endocrinologist who diagnosed low calcium and hypoparathyroidism. It was a lightbulb moment for Jan!

Jan writes: ‘We were spending more and more time in Portugal.

It became obvious that my hypoparathyroidism was happier in the sun. I was at that time taking 12 alfacalcidol and up to over 30 Adcal tablets to maintain a good level in the UK. It was crazy. I take Pariet daily for hiatus hernia which affects the absorption of any medication. Then, out of the blue, we had an offer for the UK property we had owned for 35 years.

That was the turning point. We found a property in Torquay for my Mum and Dad, our daughter and family decided to join us as Julie has serious eye problems, and we moved to Portugal in 2004 with our Bearded Collie – Lennie; our Old English Sheepdog – Sandy; and my baby Old English Sheepdog – Chloe. ‘Now 70 we are both still working here with our daughter. ‘I have loved dogs forever.

My more in depth relationship with dogs began with my Bearded Collie, Lennie, way back in 1991. He developed various autoimmune conditions over a few years. The vets were out of their depth so I unleashed my research life. Lennie had OCD of his front leg, EPI, his pancreas stopped working and then he had Addison’s disease – all before he was four years old. He was given weeks to live. I kept him alive, by research and caring for him 24/7. He added hypothyroidism to the mix at ten years old.

I get stressed with travel that affects my calcium levels, but when I have to travel between the UK and Portugal, I am much calmer with Cleo beside me. She has given me back my life.’

I learnt to work out what was going on with him. Since then, I have recognised and saved the lives of many dogs by pointing people in the direction of Addison’s. I have been correct every time. ‘Sandy and Lennie both needed natural hypoallergenic dog food, but we could not buy this in Portugal. We consulted the company. They said – why don’t you become the Portuguese distributors? That was 2004. The rest is history.

We now run a company called Paws4Pets which sells only natural doggy products, I wrote for the local paper every week for over nine years and also write for magazines, we help rehome dogs, and we run a charity dog show weekend every year.

‘The big worry was and is my health. I have high blood pressure caused by my chronic kidney disease which in turn was caused by my hypopara. I have had breast cancer, hysterectomy, and a trapped nerve in my back.

The care here is not great. It took ages to find an endocrinologist in Portugal. He changed me to calcitriol as that was their treatment here, and it worked much better than the alfacalcidol, but he left soon after that. I now have a good kidney consultant who refers me for scans and tests and gives me six-month prescriptions when I see him. I have to pay for my all my medication here in Portugal and all treatment ‘And then there was Cleo… ‘I had lost my soulmate Lennie, aged 14, in July 2005. I have to admit I lost the plot for six month.

Then my friend Laura invited me to see her new puppy, a Portuguese Water Dog. Well we were now living in Portugal! Then I heard of a puppy aged eight weeks old, just two weeks younger than Laura’s. The rest as they say is history! ‘Cleo arrived. Tiny baby, breed I knew nothing about! Quite mad really. ‘Laura decided we would go to Water Trials with our dogs and put them into the show world in Portugal. I had never shown a dog in my life.

On my 60th birthday I started to show my Portuguese Water Dog – Cleo. I struggled with my day to day life let alone taking on showing. But Laura offered to take on me! And hypopara! We filled her in on both my medic alerts, my medications etc. She took on so much. She helped me to join her in a different life. This involved being away weekends in hotels and galloping around rings with dogs. Some days I could barely walk let alone gallop! Laura had to take me back to my room many times as I was so ill! But it gave me so much. It gave me a new career.

Cleo was amazing and still is. She became a Portuguese champion, Portuguese Grande champion, Gibraltar champion, international champion and has been placed many times at Crufts. I was away weekend after weekend in a Portuguese world. She still wins shows at 11 years old. Yes I was often ill, I could be found sleeping in the dog cage with Cleo outside. My friends looked after me and Cleo. I also showed my old English Sheepdog puppy – Cassie – and my second Portuguese Water Dog – Merlin, who is Cleo’s brother one litter removed, and who I rescued after he was abandoned in a pet shop. I also have another Old English Sheepdog – Chloe.

The Portuguese Judges were fantastic. Encouraging me. They had, however, noted that Cleo would often ‘amble’ not run around the ring. Between us we noticed this seemed to coincide with my bad days. Clever people.

I was writing weekly articles and was asked to assist with a seminar given by a UK Dog Whisperer to raise money for a doggy charity. In return she said she would talk to Cleo and her Brother Merlin. So I booked an appointment. I was really ill that day and remember being in so much pain I was sat on kitchen floor in floods, Cleo was beside me, very upset, obviously trying to calm me down. But I was determined to go and eventually got there.

The Dog Whisperer spoke to Merlin first, that was amazing and so true to fact considering the lady did not know me or live in Portugal. I collected Cleo, took her to the lady and put Merlin back in the car. Cleo was not quite three years old. I returned to find them both deep in conversation. The lady started to tell me what Cleo was telling her. She said, “Mummy is very ill, I know Mummy is ill, she sometimes cannot walk for pain. I want to help Mummy but I do not know how. I stop running when she is in pain but I do not know how to help her”. We had an hour’s consultation. ‘It was after this that Cleo started to alert me to my ‘crashes’. She will bark and give me a paw, she got distressed as I didn’t know what she was doing.

Friends pointed out that this was happening regularly about 30 minutes before I became really ill. ‘I have had advice and help from a charity in the UK but the waiting list for assistance dogs or for training is very long and in any case I live half in the UK, half in Portugal so attending classes was never going to be easy, coupled with me not being happy travelling. ’One time Cleo refused to get in the car. She was running around it barking and I had to force her to get in. Thirty minutes later I felt rough and asked my grandson for my pills. They weren’t in the car. I had left them at home which I suppose explained why Cleo would not get in!

She watches me all the time, looking back to check on me if we are out for walkies, and following me everywhere. She sleeps beside me with her head near to mine, she calms me. Friends and family remark on her constant monitoring. ‘Three years ago Cleo and I attended a dog show in Lisbon, I had bravely driven up, stopping a few times on route. We met up with friends and stood with them when suddenly a huge Royal Canin tent was caught by the wind, it took off fast and headed straight in my direction. The tent hit me on my head pushing me straight back onto concrete and burying me under the tent. Other dogs had bolted but not Cleo who stayed with me. We were both shaking heaps.

She was badly injured by the metal tent bars. But she still stayed with me. ‘Cleo is now 11 years old. I have very aged parents and I have to travel back and forth to the UK a lot. I get stressed with travel that affects my calcium levels, but when I have to travel between the UK and Portugal, I am much calmer with Cleo beside me. She has given me back my life.’