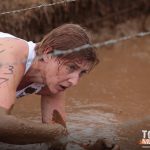 Gillian had a baby in 2013 and felt better than she had done for very long time since her surgery, but she put on a lot of weight too. After walking and exercising to lose weight she went all the way, completing Tough Mudder to raise funds for charity and then qualifying to be a fitness instructor. And she has also succeeded in gradually cutting down her calcium meds to zero!

Gillian writes: I was very fed up being overweight after having a baby, so after about six months I decided to start walking about four miles a day with the baby in his pram. After a couple of months I’d lost a stone in weight and my calcium levels didn’t seem to be too badly affected by the exercise… in fact if anything I noticed my symptoms less. I was enjoying being slimmer and getting some exercise, so, on my next appointment at the endo clinic, I went armed with information from Hypopara UK and the world-wide web and asked if my calcium tablets could be reduced, alfacalcidol increased and could I have some prescription vitamin D3 please? (If I cut my calcichew down, I’d be cutting out prescription strength vitamin D and I thought it was very important to keep that the same.)

To my delight, my endo was very happy to comply. He gave me a prescription for Fultium D3, reduced my calcichew to one tablet a day and increased my alfacalcidol from 1.00mcg to 1.5mcg per day. I reduced my calcium to one tablet a day very slowly and found I felt ok. One day I saw an advert for an all ladies Boot(y) Camp, which was exercise classes done outside and it sounded like a great fun.

So, wanting to lose more weight, I filled out the health screening form, explained my medical conditions and went along at 6.30 am the next day! Yes…6.30 AM! We were running, jumping, skipping, slamming a battle rope, doing something that almost resembled press ups and it was fantastic! I went home after 30 minutes of this crazy exercise class, tired but buzzing and feeling great. I took a little extra calcium, but I was fine and there were no crashes. I continued with these classes for another 12 weeks and lost another stone in weight.

Many inches of fat disappeared and lo and behold … I had some muscles appearing. The instructor, Louise, asked the class one day if anyone fancied joining her and some others in completing Tough Mudder to raise funds for Children In Poverty. I signed up and started extra training with her. I also joined the local authority gyms and was exercising quite intensely four to five times a week.

All the while my calcium supplement was just one tablet a day. I gradually reduced it for a year and one day decided I didn’t need it at all. So, didn’t take it … and I was fine. I was still exercising every day for at least 30 mins at high intensity and I was fine!

We completed Tough Mudder on 26 June this year and, although I was concerned about my calcium levels and had taken medication with me in a waterproof (and mudproof) bag, I had again been fine! I hadn’t had any emergencies, no crashes. The worst was cramps in my calves towards the end, when we had started to slow down around about Mile 11 or so, but even that was manageable. And I wasn’t the only one, many participants were starting to cramp up, so it was normal.

Boosted by my success in completing Tough Mudder, and finding I could do all this exercise with very little in the way of symptoms or side effects, I decided I wanted to do more and become a fitness instructor. So, with the help of my Instructor, Louise, I found a course and went for it. I accomplished my goal and qualified as a Level 2 Fitness Instructor in July this year.

However, I wanted more, so I started College in September and am now studying HNC Health, Fitness and Exercise. Once I have completed that next year, I will do an 18-week HNC Personal Trainer Course. I’ve also passed a course to become an instructor of classes in a maximal intensity exercise programme called Fatburn Extreme. I thought when I had my thyroid removed and ended up with hypopara, that life would never be the same again … and it hasn’t!

With help and support from Hypopara UK, and an understanding endocrinologist, I have managed to hop, skip and jump, (literally) back into life.