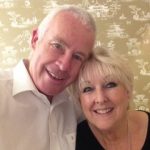 Beryl was diagnosed with primary hyperpara with an adenoma on each side of her neck. After surgery, though, she felt worse, and it turned out only one adenoma had been removed. It took another six months and a second opinion before she had a second surgery. The operation was an immediate success.

Beryl writes: In August 2015 I went to see my GP with headaches, sickness, feeling full and a general feeling of being unwell, symptoms that I had been suffering with for several months. The doctor was quick to suspect a parathyroid problem but thought it best to eliminate other possible causes first to make sure nothing else was being missed. All alternative investigations came back negative. The next stage was to be referred to an ENT consultant at my local hospital. The scans that followed came back positive, indicating that there was a parathyroid adenoma on both the right and left side of my neck.

At last I felt I was getting somewhere. In August 2016, I had my operation, having been booked in as a day patient. I attended at 7.30 in the morning and after waiting ten hours in a chair, being denied anything to drink or eat, I went down for my operation. Until this time I had not seen the consultant who was performing the operation but I felt sure that he would have been aware of my diagnosis. I was discharged at 11.30 pm, feeling traumatised by my treatment that day. No discussion whatsoever had taken place about what had been done or if, indeed, the operation had been successful.

Little did I know what was to follow. The following week I felt worse. My symptoms had not abated. I then had to wait six weeks for an appointment with the consultant to discuss my interim abnormal blood tests. I was shocked to the core to discover that the consultant had only focused on the right side of my neck, removing an obvious abnormal parathyroid .No investigation whatsoever had been done by him on the left side. His only comment at the time will ring in my ears forever, namely “Where do we go from here”. It was not until I got home that I really felt angry and wanted to challenge him about the situation. My attempt to make a further appointment with him was declined until I had attended for another round of further scans.

At this point I decided to get a second opinion and after doing my own research online I discovered the Hypopara UK and this is where I received the most helpful, understanding and positive advice that I could have had. This led me to make a private appointment with a consultant in endocrine surgery at the Hammersmith Hospital in London. I was informed I had “persistent hyperparathyroidism” which was confirmed with the utmost speed by further scans. On 2 February, I had a second operation, which resulted in the removal of a parathyroid on the left side together with partial correction to the other gland on the same side. The operation was an immediate success.

I would like to extend my personal gratitude to Liz at Hypopara UK and to my consultant, who have fundamentally saved my life. My advice to anyone who finds themselves in a similar situation, which in itself is a very complicated and intricate procedure, is to seek a consultant who specialises in this field and who has a proven record.