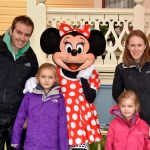 Ben and his daughters, aged 4 and 2 months

I was found to have low calcium levels during tests from a work medical at the age of 31 but have never had any symptoms. Calcium tablets alone did not have any impact and after further tests and no real understanding from my GP I requested to be referred for private treatment to a specialist in hypoparathyroidism. I started on Alfacalcidol which initially had no impact. Despite levels recorded at 1.49 I remained unsymptomatic throughout.

Meanwhile our daughter Sophie had been unwell and had 12 seizures before the age of two, all associated with raised temperatures. After one such incident a calcium test was ordered and then we were able to make the link and Sophie was then also diagnosed with hypoparathyroidism. She started Calcitriol treatment which was successful and so I moved across to Calcitriol too. Levels for both of us have remained unstable with Sophie having hypocalcaemic seizure-type episodes and vomiting and loss of appetite with levels of up to 3.3. The only symptoms I have had on high calcium levels have been itchiness, headache, loss of appetite and nausea. My high levels have been 2.7 to 2.9. Treatment from both Sophie’s specialist and my own has been excellent but we are often frustrated with the GP service and level of understanding in getting results.

At the time that my calcium levels were low my wife Heather and I were struggling to have a second child but didn’t see a link at the time. We were referred for IVF with the knowledge I had hypoparathyroidism but the fertility consultants did not investigate my calcium levels. Three failed cycles later we discovered some literature linking calcium with fertility and three months after my levels normalised we fell pregnant. We were not given any genetic counselling about the risks of another child having the condition and it now seems that Jessica has it too. She is now on two drops of Alfacalcidol and doing well.

There is no prior family history of hypoparathyroidism that has been discovered in either of my parents so it is still a mystery how I got it. We are waiting to see a geneticist to discuss it.